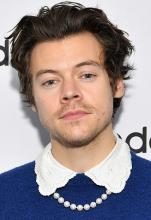 Harry Styles learned about Katy Perry’s pregnancy before anyone else -- other than Orlando Bloom and Katy’s OB-GYN.

Katy admitted to spilling the secret to Harry. They happened to book the same commercial flight. They shared the same row in first class. Katy recalled during a British radio interview, (quote) “I saw him on a plane before I announced that I was pregnant. We were having a conversation and I was like: 'Yeah and I'm pregnant,' just like off the cuff.”

Harry responded by offering to give up his seat so that Katy could stretch out. Katy called him a “complete gentleman” for that gesture. (The Mirror, U.K.)